Who Else Wants Unique New Chords To Give Their Guitar Playing An Extra Edge? 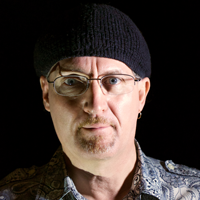 Hi, I'm Colin Daniel. Years ago I had a student who was always using oddball chords that sounded really cool, and because of that, you could immediately distinguish his playing from all the others.

Not all chords are created equal, and today we're going to take a look at some lesser known gems that tend to hide a little ways off the beaten path.

Adding these into your playing will not only give you a unique sound, it might also get other guitar players scratching their heads and asking questions!

When you hear the term 'open chord' most times it is referring to one of the tried-and-true chord shapes we all learned in our first week of playing the guitar. Sometimes they're called cowboy chords because of their dependable simplicity, and to be frank, thousands of hit songs have been written using the classic G, C, and D open chord shapes.

Simply put, they're great, dependable chords, and there certainly isn't anything wrong with them.

Everyone else is using those same chords too, and after a while, if those are the only chords in your toolbox... well, sometimes it can start to seem like your playing really doesn't sound all that much different from everyone else.

And in the guitar world, it's always great to have a unique twist that defines your own style of playing.

You know, I've been hacking around on a guitar since 2007.

I can play lead, solo, and learn a tab quickly but chord progressions FORGET IT.

Till now that is - Riff Ninja has helped a lot, especially the Bag of Chord Tricks course. It changed my playing and took it to a new level.

The term 'open chord' simply refers to a chord shape that makes use of one or more open strings. Typically, open chords are found in the first few frets, but that doesn't have to be the case.

In fact, there are numerous other places on the fretboard where we can find open chords - sometimes at the 7th fret, or even higher!

These chord shapes aren't that hard to wrap your fingers around, but because of the interesting blend of higher notes (from being further up the fretboard) and lower notes (the open strings), the sound that is produced is quite different than your standard cowboy chords... and yet they can be used as perfect substitutes!

Sometimes just a single oddball chord shape can be all the inspiration one needs to write a new song, because the notes come out differently, and send our ears and minds in a different direction than they would go just hearing a standard open D chord.

I have just got to the end of your ‘Bag of Tricks - Chords’ course and found it really useful.

It has opened up a new approach for me and explains what I see guitar players doing on stage.

In the Guitar Player's Bag of Trick Chords, I've included more than 40 cool and unusual chord forms that sound rich and full like the more common open chords you're used to, and yet they have a unique and unusual flair to them you cannot find elsewhere. These chords aren't physically difficult; the trick is simply in knowing when, where, and how to use them.

The better you understand how chords are constructed, the better you'll be able to find places to slip some sweet variations into your playing. In this course, we'll cover the chord theory you need to understand how these unusual chords are constructed, how they're closely related to the standard open chords you're more familiar with, and how they can be used to create cool new contrasts in your playing. 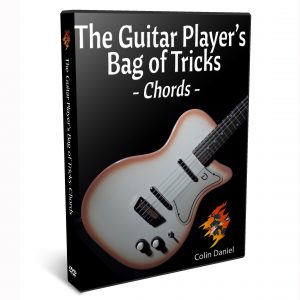 In addition, because we'll be dealing with a lot of chords higher up the fretboard, you will find your knowledge of the fretboard naturally improving as you find new uses and applications for those higher notes.

I've spent a lot of time playing different kinds of gigs over the course of my career, and sometimes, we're playing as a three piece band: drums, bass, and guitar. If you've ever played in a three-piece, you'll know it takes a lot to make it sound full and rich; it's a totally different experience than playing in a four piece where there might be another guitar, or perhaps a piano to help fill in the sonic holes.

Whenever I'm playing in a three-piece situation, I love using these uncommon open chords found higher up the fretboard. They have such a rich, open-chord quality to them that it not only makes your playing sound cool and different, it also sounds so rich it can help you pass off as a four person band. This was a favorite trick of mine, because if three people can split the same pot four would normally split, that's a good night!

Fantastic Colin. Thank you. I have seen and purchased the Triad lesson packages by all of the great teachers on the web.

This one has gone straight to number one in the charts.

I learn from everyone but this explanation was just so clear and so helpful. Many thanks for your calm way of explaining and teaching.

Chords need not only be used for rhythm work, although they sure excel there. You might be surprised to know that many of the most iconic opening riffs to famous songs are in fact using a small handful of notes... pulled straight out of a chord.

Eric Clapton used a simple three-note minor chord as the foundation of his classic solo in All Your Lovin'. Mark Knopfler used a D minor chord as the foundation of his famous Sultans of Swing intro solo. There are dozens and dozens of examples, but here's the bottom line: learn how to use cool chord voicings as a foundation for your solos, and you will notice your riffs and solos begin to demonstrate a far greater melodic quality than before.

Chords themselves are cool, but I've found that it is not until you're given a place to use them that they really sink in and begin to become part of a player's go-to bag of tricks.

That's why in the Guitar Player's Bag of Trick Chords, we'll not only learn the chords and the theory to support them, we'll also apply them to some popular songs to help make it all stick. You'll find that these little-known chords are in fact highly usable!

If you’re hesitant about purchasing online, that’s okay – I understand. In fact, that’s why I stand behind all my guitar lessons with a 100% Risk-Free “No Weasel Clauses” Satisfaction Guarantee.

My guarantee states that if for any reason you’re not completely satisfied with the guitar lesson, I’ll give you a complete refund within 60 days of purchase, with no hassles.

This completely eliminates the risk on your part – you’ve got nothing to lose, and everything to gain by trying The Guitar Player's Bag of Trick Chords!

45+ Years of Guitar Teaching Experience, At Your Service

So who is this Colin Daniel guy? Well, without tooting my own horn, I wanted to assure you that you’re in capable hands. I’ve been a professional musician and teacher for over 40 years… I’ve played hundreds of gigs, led dozens of bands, written dozens of original songs, and taught over 5000 guitar players in person, many of whom have gone on to become professionals in their own right. Recently I've been able to reach even more students via the internet, and I'd love to help you learn guitar too!

Are You Ready To Start Chording On The
REST Of The Fretboard?

The Guitar Player's Bag of Trick Chords is laser-targeted on some unusual, but exceptionally useful guitar chords. You will learn how to use them in the context of progressions as well as solos - true chord knowledge helps both your rhythms and your riffs!

Are you ready to start your path to becoming a great guitar player? Join me and we'll make it happen!

To Your Musical Success,

PS. If for any reason you’re not satisfied, you’re protected by my 100% Risk-Free Satisfaction Guarantee for a full 60 days.

PS. Both the DVD and the Download Only version include the same lesson material: the main video lesson. The DVD version includes download access, with the additional convenience of having everything on DVD as well.

This was so helpful. I bought this course yesterday and although it was probably the shortest course I've bought from you guys at Riff Ninja, this really boosted my playing. Thanks so much, rock on!